Aggregating and archiving news from both sides of the aisle. 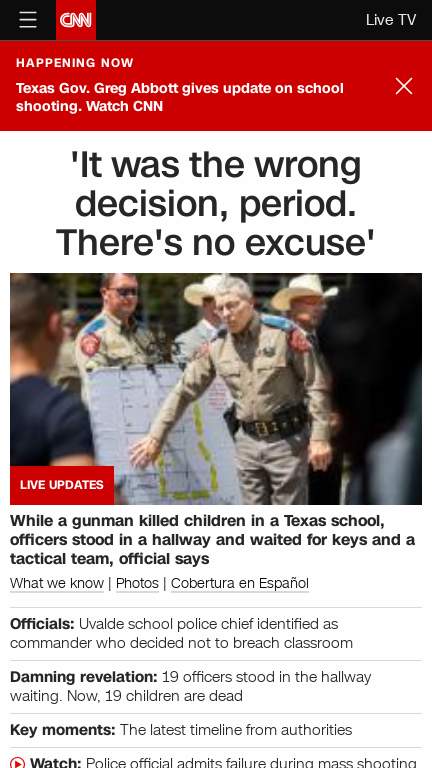 Preview: • Analysis: States with the most gun violence share one trait

She smeared blood on herself and played dead: 11-year-old reveals chilling details of the massacre

Preview: • More details emerge about the 19 children and 2 teachers killed

While a gunman killed children in a Texas school, officers stood in a hallway waiting for keys and a tactical team, official says

Preview: Steven McCraw, director for the Texas Department of Public Safety, says the on-scene commander during the mass shooting at Robb Elementary School made the wrong decision and did not attempt to breach the classroom where the gunman was quickly enough.

Details: Uvalde school police chief identified as commander who decided not to breach classroom
'Goodnight': 11-year-old describes what she heard and saw as shooter moved through classroom

Preview: 11-year-old Miah Cerrillo spoke with CNN producer Nora Neus and said a gunman shot her teachers and friends inside a classroom at Robb Elementary in Uvalde, Texas. Her family set up a GoFundMe page to help pay for her recovery treatments.

What we know: Here's the latest timeline from authorities

Preview: • Gunman: What we know so far about 18-year-old Salvador Ramos • Analysis: States with the most gun violence share one trait

Preview: Grammy Award-winning country singer Larry Gatlin joins CNN's Pamela Brown to discuss why he dropped out of performing at the NRA convention in Houston.

Opinion: What Steve Kerr and Beto O'Rourke are exposing for all the world to see

Preview: Millions of Americans have responded to the horrific mass shooting at Robb Elementary School in Uvalde with wrenching and public displays of anger, sadness and rage against the nation's broken political system. This latest tragedy comes a little more than one week after 10 people were killed in a racist hate crime that purposefully targeted Buffalo's Black community. The massacre in Uvalde coincided, almost to the day, with the second anniversary of George Floyd's murder. 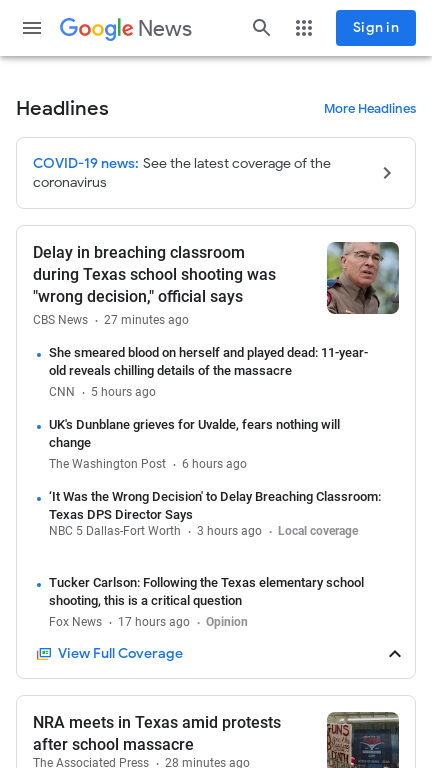 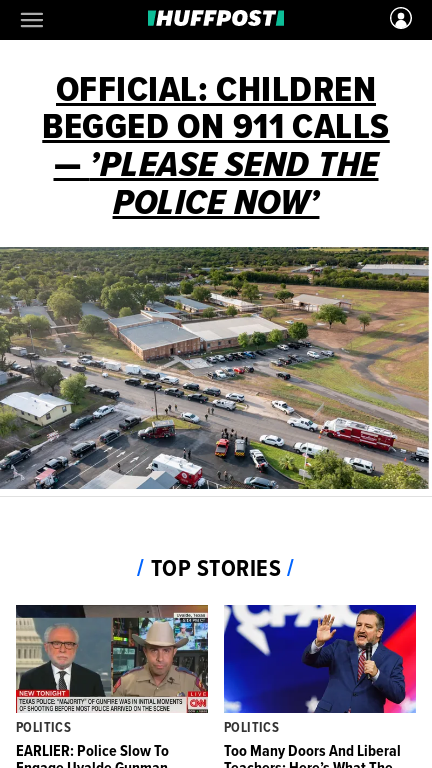 Preview: The Texas Republican Cruz has used some phrases multiple times in tweets about mass shootings, but not an identical template.

Uvalde Student: 'I Played Dead So He Wouldn't Shoot Me'

Preview: “There was blood on the ground,” said 10-year-old Samuel Salinas. “And there were kids [...] full of blood.”

Preview: Pebbles, 22, has snatched the Guinness world record from the jaws of a 21-year-old Chihuahua named TobyKeith.

Preview: A new show opening in London on Friday features a version of the band created using motion capture and other technology with a 10-piece live backing band.

Preview: Col. Steven McCraw said 19 officers waited outside a classroom door because a commanding officer "believed there was a barricaded subject and kids weren’t at risk."

Preview: “For 300 years, Elizabeth Johnson Jr. was without a voice, her story lost to the passages of time."

Rhode Island Home That Inspired 'The Conjuring' Sells For More Than $1.5M

Preview: The buyer, Jacqueline Nuñez, said the “purchase is personal" for her. “It’s not a real-estate development. It’s around my own beliefs.”

Is A Recession Coming In The U.S.? Here's What Experts Say.

Preview: "We knew that we needed significant gun reform, and so that is what we did,” Ardern told students at Harvard University's commencement ceremony.

Preview: The Charles Manson follower wrote "Helter Skelter" on a wall using blood of one of their murder victims. 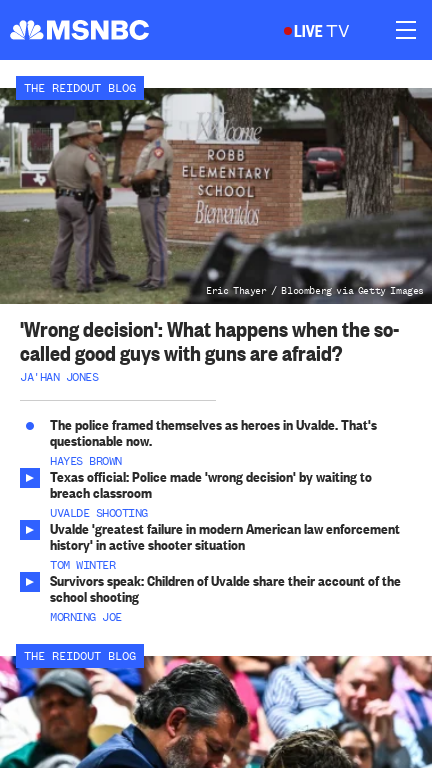 Preview: The school shooting in Uvalde, Texas, begs the question: What happens when the Republicans' so-called good guys with guns are afraid or incompetent?

Several performers, speakers pull out of NRA convention. And then there's these people.

Preview: The National Rifle Association is bumbling onward with its convention in Houston, despite this week's mass shooting at an elementary school in Uvalde, Texas.

Preview: Instead of relying on mythology, let's base our commonsense gun reform debate on data.

Preview: While making the case against gun laws, Rep. Lauren Boebert said, "When 9/11 happened, we didn’t ban planes." That was accidentally a good point.

Trump was finally right about Michigan voter fraud. But very wrong about the culprits.

Preview: Say what you will about Trump — and believe me, I have — but he was right to be on the lookout for election fraud in Michigan.

Sure seems like Jim Jordan suddenly has something to hide from the Jan. 6 committee

Preview: The Ohio Republican insisted he had "nothing to hide" about Jan. 6. Then he was subpoenaed. Suddenly, Jim Jordan now seems to have something to hide.

Preview: Herschel Walker had 48 hours to come up with some thoughts on this week's school shooting. He apparently did not use that time wisely.

As senators begin new gun talks, will this time be any different?

Preview: Some senators think this time might be different. And Charlie Brown occasionally thought that Lucy would actually let him kick the football, too. 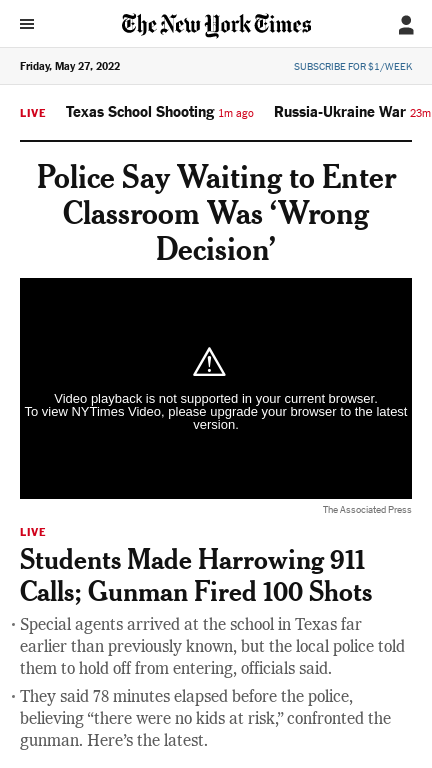 Preview: The response should center on neutralizing the gunman, a training program that is the national standard says, and then on getting medical aid to anyone who has been injured.

In Cruz and Cornyn, Texas has two senators with two divergent responses to a gun massacre at home.
A Putin Opponent From Russia Leads Fighters Against His Home Country

Preview: “The hottest place to fight against the regime was in Ukraine,” says a unit commander who has been a volunteer soldier for his adopted country on and off since 2015.

Why the Once-Hawkish Heritage Foundation Opposed Aid to Ukraine

Preview: The conservative think tank has shifted on foreign policy along with the Republican grass-roots, and it is taking a more skeptical view of U.S. involvement in the world.

Preview: A campaign is circulating a list of dozens of researchers in the hopes they will be denied the prestige of election into the Russian Academy of Sciences.

Preview: Mr. Trump had argued that an inquiry by the attorney general, Letitia James, violated his constitutional rights. It was his second legal loss in two days.

Preview: The district attorney in Fulton County, Ga., is weighing racketeering charges connected to G.O.P. attempts to overturn the 2020 election.

How an Organized Republican Effort Punishes Companies for Climate Action

Preview: Legislators and their allies are running an aggressive campaign that uses public money and the law to pressure businesses they say are pushing “woke” causes.

Preview: A gallon has jumped by about 50 cents over the last month as Russia’s war in Ukraine has continued to unsettle the global energy market.

Preview: The interim government’s move was seen as a bid to revive a $6 billion bailout from the International Monetary Fund. 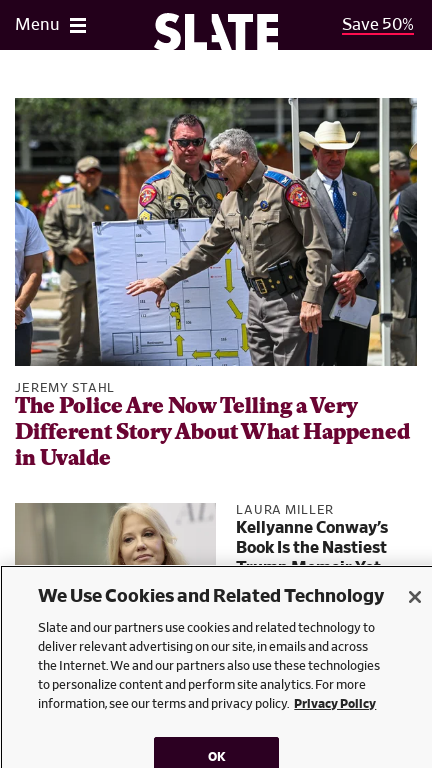 Preview: Since when are there velociraptors in Star Wars? What was that spinny lightsaber? And was that Flea?

Preview: Officials offered a clearer accounting of the Uvalde massacre—and how the police failed.

The Unavoidable Factor That Could Determine the War in Ukraine

Preview: What Kissinger and the New York Times editorial board have in common.

Preview: If these leaders were truly worried about mental health, they could have, and would have done something about it long ago.

Preview: Iceman and Maverick jetted lifesaving homoeroticism past a generation of conservative parents.

Dear Care and Feeding: My Husband Got Me the Objectively Wrong Gift for Mother’s Day

Could Monkeypox Bring a New Wave of Homophobia?

Preview: Some experts worry that linking monkeypox with gay and bisexual men risks repeating the mistakes of the early days of the HIV/AIDS epidemic.

What the Golden State Warriors Have to Fear

Preview: They’ve made the Finals yet again. But the old dynasty they’ve emulated is also a cautionary tale.

The Eerie Similarities Between <em>Depp v. Heard</em> and the Biggest Celebrity Trial of the 1850s

Preview: Actors with terrible marriages get everyone talking. 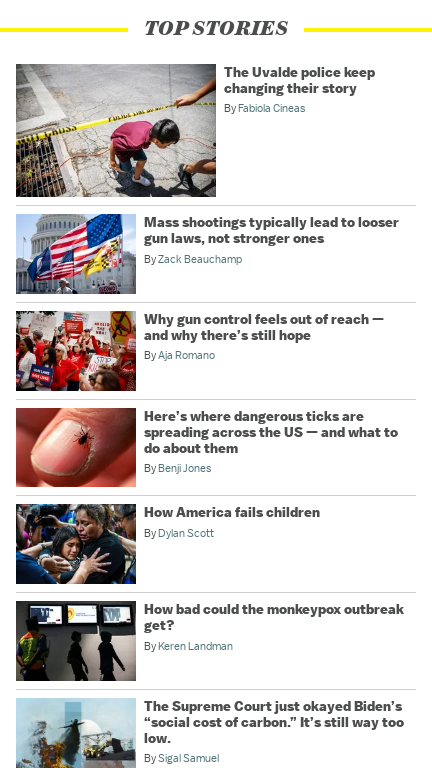 The two paths Congress could take on gun control

The long, long, twisty affair between the US military and Hollywood

How bad could the monkeypox outbreak get? 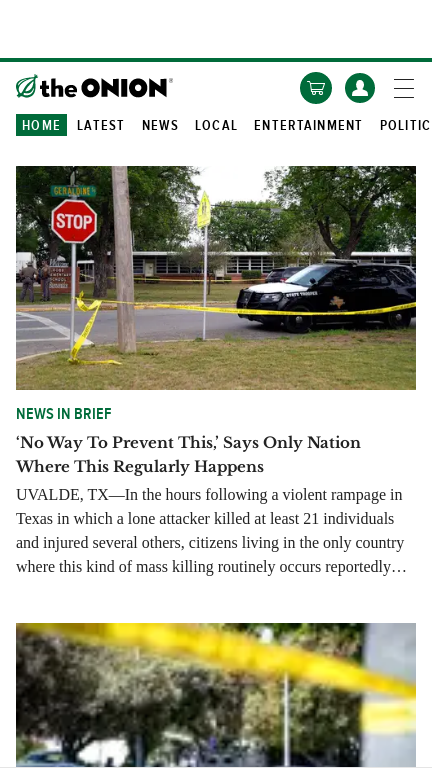 Preview: Senate Republicans have blocked a bill designed to combat domestic terrorism by setting up offices to track domestic terrorist activity and identify risks in order to prevent more incidents like the racially motivated mass shooting in Buffalo. What do you think? Read more...

Psychology Fact: Did You Know?

Preview: After six weeks of constant analysis and content, the verdict is in: We are as a people simply too impatient, stupid, and psychologically stunted to be discussing this trial at all. Read more...

Preview: VATICAN CITY—In what theologians are describing as a giant step forward in divine surgery, a team of Vatican scientists successfully transplanted a pig soul into a human for the first time in church history, sources within the Holy See reported Friday. “We were in prayer for more than eight hours, but we’re pleased to… Read more...

Preview: NASHVILLE, TN—Determined not to let a lack of available substances prevent him from executing an inmate on death row, desperate Tennessee judge Gary Hargreave was reportedly making lethal-injection drugs in a courthouse toilet Friday. “It’s not ideal, but we’re going to execute that guy one way or another,” said… Read more...

The Pros And Cons Of Letting Children Die

Preview: America is currently wrestling with the difficult and controversial question of whether it’s worth it to make an effort to keep children alive, not to mention safe, educated, or healthy. The Onion looks at the pros and cons of just letting children die. Read more...

Report: Your Child Currently Sitting In A School Right Now

Wayne LaPierre States Mass Shootings Can Be Perfectly Safe When Carried Out By A Trained, Responsible Gun Owner

Preview: HOUSTON—Addressing the massacre that occurred at an elementary school in the state only three days earlier, National Rifle Association CEO Wayne LaPierre told attendees at the organization’s annual meeting Friday that mass shootings could be perfectly safe when carried out by a trained, responsible gun owner. “By… Read more...

Preview: HOUSTON—Shouting with glee and jostling each other to get a better spot, the audience at the National Rifle Association’s annual meeting reportedly burst into applause Friday as a gunman massacred the entire crowd. “Woo! Shoot us all!” multiple spectators were heard to yell as the armed assailant, believed to be… Read more...